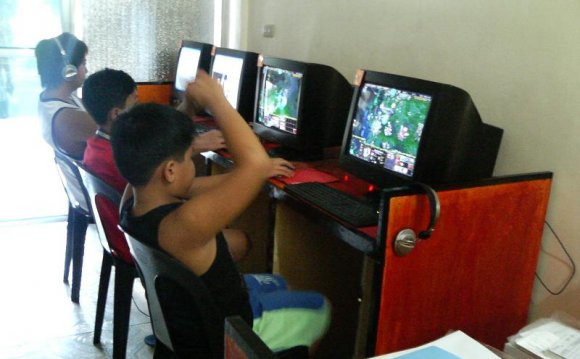 The 'cafes' came to rule the popular imagination to such an extent that even Bollywood movies were based on them. Remember the Sonali Bendre-Kunal Singh starrer Dil Hi Dil Mein where the hero spends hours in a cafe, romancing the heroine through the internet?

But internet cafes, much like video rental shops and pool parlours, are now disappearing from India's tech landscape as well as its popular mindscape. In city after city, they have quietly closed or turned into something else. Those that are still in business are attracting fewer and fewer visitors. In 2013, a measly 5% visited cybercafes to browse as against 46% in 2009. During the period, internet use from home rose from 58% to 78% and access via cellphones rose from 12% to 18%, says a Tata Consultancy Services study.

In a way, the decline of the cybercafe is an indicator of the growing popularity of smartphones and cheap broadband. As Sujit Shyam, a Mumbai college student, put it: "Why access internet on someone's computer when I can check Facebook on my iPhone anytime and from anywhere?"

A far cry from the days when the net was a novelty, and the neo-net addicts didn't seem to mind the annoyingly slow dial-up connections, long queues and exorbitant browsing charges.

A few, however, are still holding on. Perfect Point, an almost two-decade-old internet cafe in Mumbai's Churchgate area, is still in business because it is in the city's college hub. It charges Rs 50 an hour.

"The cafe is still frequented mostly by students, but now they come for a different purpose-to take print-outs and play games, " says P K Patel of Perfect Point. "The influx of foreign tourists and outstation visitors too has dipped with hotels providing guests wi-fi facility."

Students checking their exam results at a cybercafe in Patna. (TOI Photo)